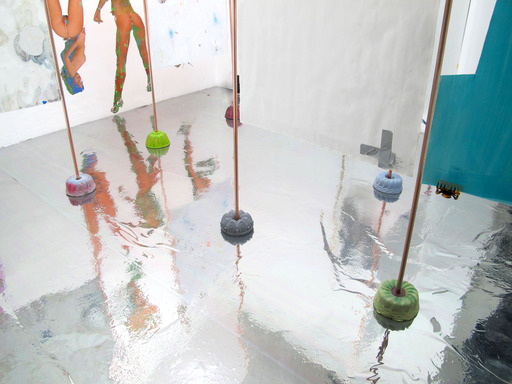 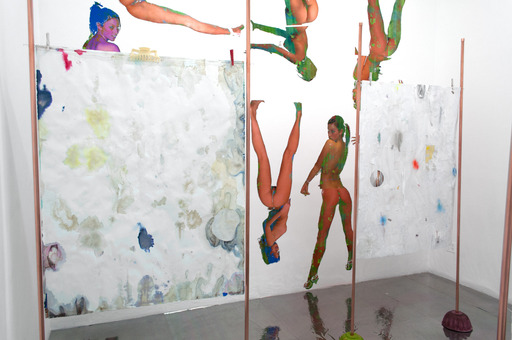 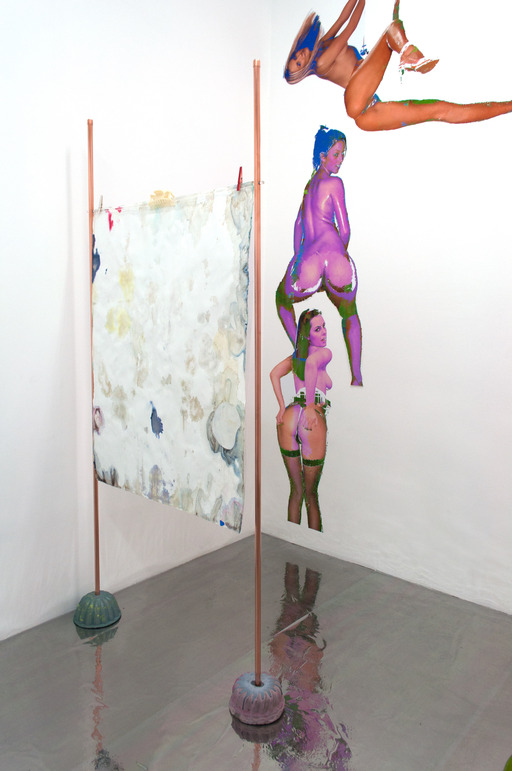 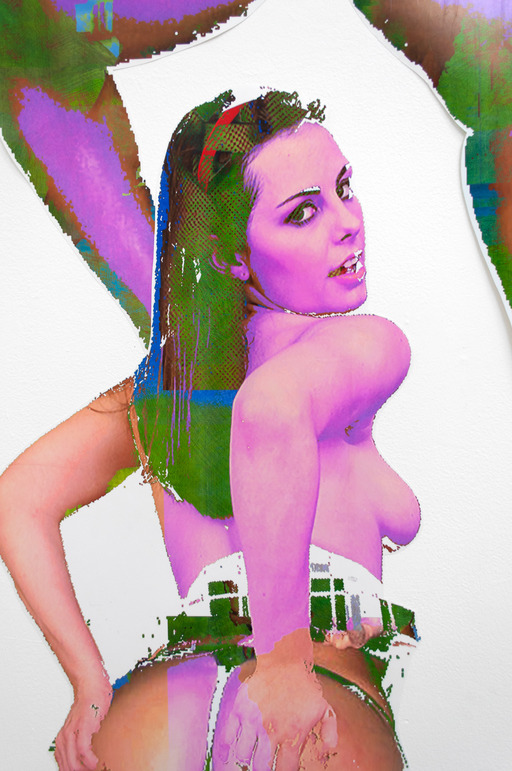 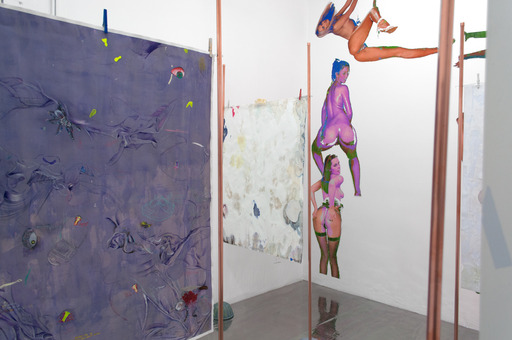 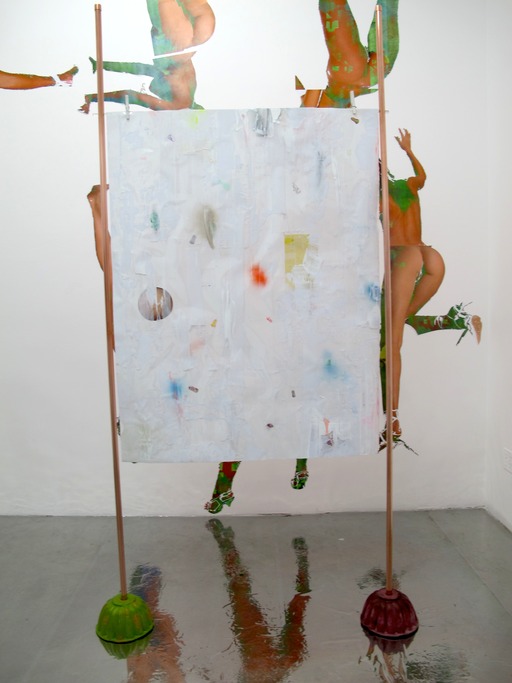 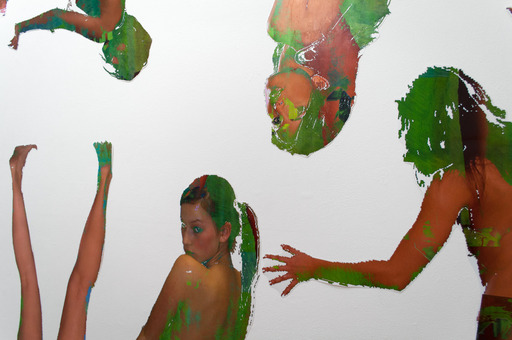 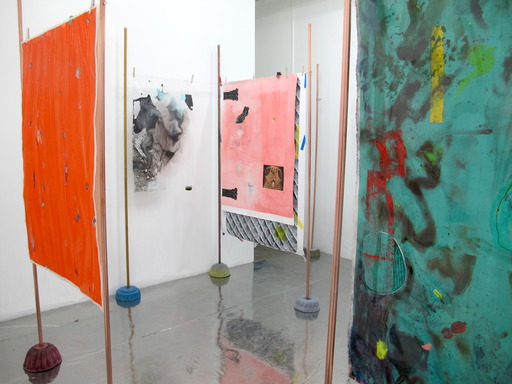 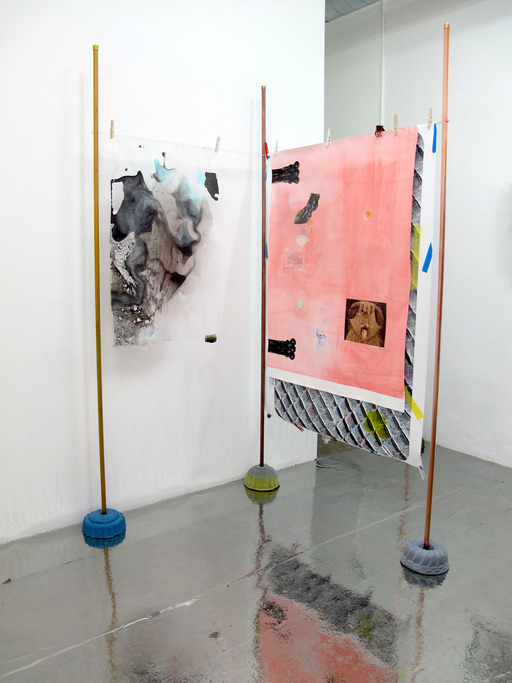 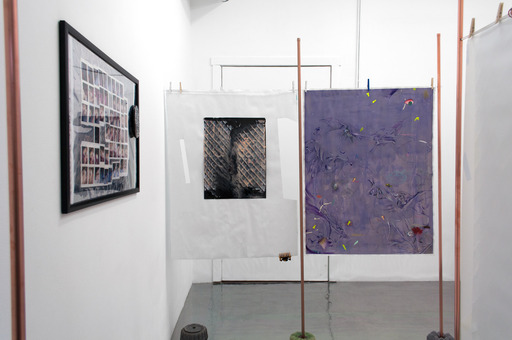 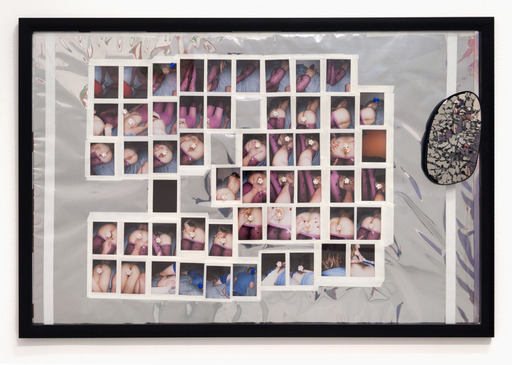 Creeping Into the Light is a collaboration between R Miller and Stevie Hanley.

I am writing with two hats for this show: one as an artist and one as a co-director at Julius Caesar. It is a JC tradition for directors to show their work. It is a moment of divulgence and transparency. You can see what we make and gain insight to our programming.

I came to know Stevie through the MFA program at SAIC. As a classmate, I came to appreciate his straightforward and open attitude towards his sexuality and identity. He is very honest and never pretends to be anybody other than he is. I admire him for offering clarity in an unclear world.

It goes without saying Stevie was a great influence on me in art school, and I am proud to champion him after it. Working with him on this show was a privilege, in both conception and production.

My curatorial objective at Julius Caesar is to create a location for differences to become positives rather than points of comparison. I am not trying to bring Stevie’s and my work together, or break it apart, but rather move past the straightforward dichotomy through which we see group shows.

Stevie and I brain stormed over what we could show that might over lap. Over a couple glasses of wine, I told him his work could be hash-tagged kitchy witch queer art, while mine has been more American, death, and straight-white-male creep art (original I know). While Stevie has located something very specific, I struggle with the straight white male tendency towards a generalized tableau. My intention is to reveal the differences without comparison or relativity, and highlight diverging approaches with mutual respect.

Boutique sexuality also tends toward bodies being as anonymous as the director’s disembodied voice, face-behind-the-camera or one watching the video. Contrived circumstances – real and false – become the distinguishing characteristic for most video series. “Backroom Casting Couch,” “Bang Bus,” “Teen Sex Couple,” “Fake Agent,” etc., offer Lo-Fi aspiration as proof of authenticity. The only verifiable authenticity, however, is their engagement. They share a wariness of the viewer: faces become blurred, context and dialogue mere representation. You can choose to believe it, but the viewer’s disdain snuffs out any claimed reality. What’s left to-be-seen is meant-to-be-seen, and nothing more. The reduction of the artists’ gesture appears to alienate man and woman from their actions, but frees them from the tyranny of being known through being seen.

The creep stares longingly. I always stare. I always know that I stare. I look and think about looking and never stop. The persecution of the gaze makes seers shy, but staring with empathy and thought is valuable, even as a creep in public. Seeing has been relegated to private or prepared space. The grace of the art space is the offer to be seen: art work and the artist.

“The Dainty Satanist,” as described by Vaginal Davis, has made a practice of carrying out the Mormon Mission he was never allowed to begin due to a failed church-lead “sexual re-orientation” therapy. His works engage intimacy, radical empathy, elevating psychic baseness and cosmic retribution.

Harnessing the power of shame, my work delineates a space both sacred and profane, creating a sense of sacrilege. The problems raised by religion, that ancient technology of the self, have served as creative provocation for my art. I regard religion through psychoanalytic and ethical lenses – a set of practices providing ways of relating oneself to oneself, and thereby relating that self to the world. It seems almost impossible to speak of the Abrahamic religions without somehow speaking of shame.

I regard my studio as ‘The Pervert Kitchen,’ taking permission and pleasure in a practice of sculptural and material investigations in concert with the task of representation, aiming to harness the experiences of shame as an energy of revolt, reclaiming sites previously associated with a sense of violation or misuse as new forms of veneration.

On the work being shown: I am excited to be exhibiting a newly completed series of large scale works on paper suspended from elaborate sculptural stands collaboratively built with Roland Miller. The series thematically orbits earplugs as a site of visual meditation, and is concerned with color, synesthesia, liquidity, and the pleasure in maintaining and traversing boundaries.