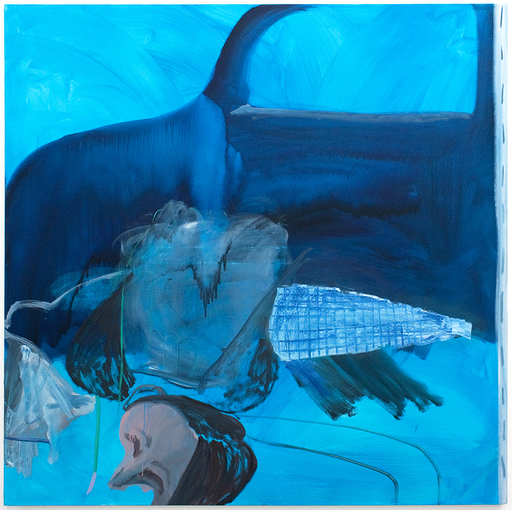 Julius Caesar is pleased to present the work of Larissa Borteh. Often working from memory, Borteh creates narrative paintings and works on paper that pull information from the personal, the interior, the hypothetical, the embarrassing, and the cried. Fragmented, repressed, and impotent forms are pushed together and pulled apart as the familiar collapses into the unfamiliar. Negated and disjointed, Borteh’s forms merge into surrounding space.  “I embrace the crevice where form dissipates and construction is possible,” says Larissa.

Repetitive tasks and habitual locations from Borteh’s life become the visible structures of prison, both trapping and inhabiting the body. Her works “transcribe the visceral path of the body through time and space,” while also creating an “unending, turbulent vessel that is fraught with resistance and choice in the face of an impenetrable backdrop.” In her exhibition Another Trap Door, Borteh builds a narrative space that encompasses past and future events as a single moment in time.

Larissa Borteh was born in Columbus, Ohio.  She received a BFA from the School of Visual Arts in New York City in 2010, and an MFA from the School of the Art Institute of Chicago in 2014.  Recent exhibitions include Hyde Park Art Center, Chicago; Zolla Lieberman Gallery, Chicago; Andrew Rafacz Gallery, Chicago; Minotaur Projects, Los Angeles; Cranbrook Art Museum, Bloomfield Hills; The Union League Club, Chicago; Skylight Gallery, New York; 1708 Gallery, Richmond; and the Visual Arts Gallery, New York.  Larissa has been a recipient of the George and Ann Siegel Fellowship; Leon Levy Foundation Grant; Dave Bown Projects Award.  She has been an artist in residence at the Vermont Studio Center, Johnson, Vermont; The Association of Icelandic Visual Artists (SÍM), Reykjavik, Iceland; Kunstnarhuset Messen, Ålvik, Norway; and was a MacDowell Colony Fellow.  Larissa currently lives and works in Chicago, Illinois where she is an Adjunct Assistant Professor at the School of the Art Institute of Chicago.

Her upcoming two-person exhibition at the Evanston Art Center will open in November 2019.