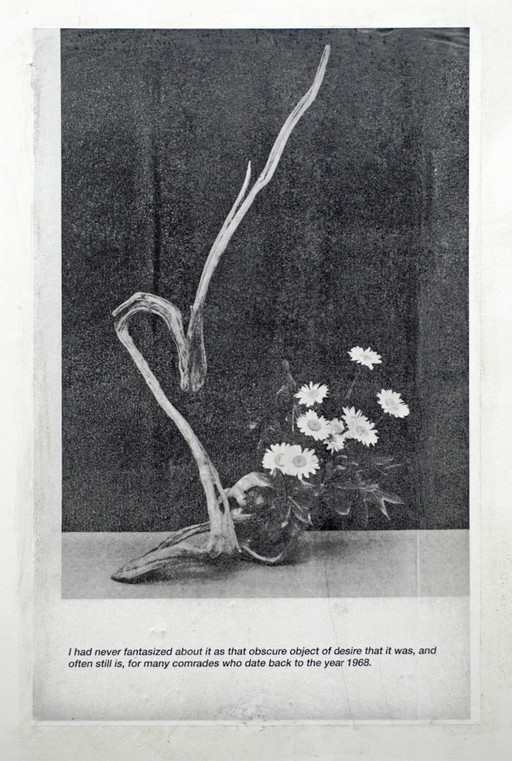 a work in situ, 2017:
consists of floral arrangements on the gallery floor.

Arrangements
as agreed upon privately with the artist’s mother-as-fabricator, arrive the day of the exhibition.

Abstraction:
[within] this rather typical mass arrangement of radiating movement, are groupings of the rounded forms of pink carnations, yellow daffodils, and variegated red-and-white tulips in contrast to the pink curved spikes of maroon snapdragons, pink stock, and rose and purple hyacinths, with a few green daffodil leaves for quiet color and additional line. This triangular design achieves depth through contrasting light and dark materials. The open outline delineates the spaces that balance the solid profusion of flowers, and it is the more open silhouette that makes this a contemporary compensation rather than a strictly period piece. The stately bronze vase lifts the mass to an appropriate height allowing air to flow under and around the composition.

Identity:
is where the artist acknowledges having no lived experience in regards to Mary G. Knight. She is their paternal grandmother. Much of which has been shared exists through storytelling. They have constructed an image and personality of who she is, based off of familial narratives. They feel an affinity towards her original sculptures.

Author of the Quixote:
in 1998, John Knight, installed groupings of floral bouquets from various restaurants at American Fine Arts, Co., New York City. Along with each arrangement sat a paper placard which announced the location from which it was sourced; a sign, signature and title for each artwork.

Cinnabar. “Your childhood is a slope. The farther down you go, the more it comes back to you. You must separate the wheat from the chaff to know who you are.”1 Aromatic Fougère; big, sensitive fern. Red Door. Real men wear pink. Butch, Cindy, Michael, Matt.

“We soon perceive that the transference is itself only a piece of repetition, and that the repetition is a transference of the forgotten past…on to all the other aspects of the current situation. We must be prepared to find, therefore, that the patient yields to the compulsion to repeat, which now replaces the impulsion to remember….”2

“When self-expression is demonstrably not the m.o., what is expressed and who is made vulnerable? I did not wish to lose sight of the madness or loopiness or gall or fun of what she put into motion….”3

Josh, Tony, Roland, Kate. Family meeting. East gallery. Now. Forthcoming paper entitled “Perfume as Institutional Analysis and Queer Transggression” to be presented on the panel Olfactory Art and the Political in an Age of Resistance, chaired by Debra Parr and Gwenn Aël Lynn at the College Art Association conference in Los Angeles.

Matt Morris is an artist, writer, and sometimes curator based in Chicago. He has presented artwork nationally and internationally. He is a contributor to Artforum.com, Art Papers, ARTnews, Flash Art, Pelican Bomb, and Sculpture; his writing appears in numerous exhibition catalogues and artist monographs. He is a transplant from southern Louisiana who holds a BFA from the Art Academy of Cincinnati, and earned an MFA in Art Theory + Practice from Northwestern University, as well as a Certificate in Gender + Sexuality Studies. In Summer 2017 he earned a Certification in Fairyology from Doreen Virtue, PhD. Morris is a lecturer at the School of the Art Institute of Chicago.